rising is the second studio album by American singer-songwriter Mxmtoon, released on May 20, 2022 through AWAL. Rising was promoted by the singles “Mona Lisa”, “Sad Disco”, “Victim of Nostalgia”, and “Coming of Age”.

2.learn to love you


mxmtoon is releasing her dusk EP, the companion piece to her previously released dawn EP earlier this year. On dusk we see Maia continue in her evolution as a songwriter and producer embarking on a newer more sophisticated sound while still exploring issues of loneliness, isolation but also self-empowerment.

Maia says of the EP, “as we begin to settle into the latter half of the year, i think we all find ourselves in a point of reflection over how our lives have progressed or stalled over the past months. one thing i’ve found myself stewing on throughout the course of this year specifically, has been the idea of new beginnings, and trying to remind myself that you can always start new stories despite the dark. dusk is meant to serve as a reminder that life is cyclical. while that may be a scary reality to some, i find comfort in the idea that despite the chaos and strife we experience in our daily lives, there is always the opportunity to begin again. even in darkness we have the capacity to strive forward, sadness is just as much a part of living as happiness is. i hope that people can listen to these songs on this EP and find comfort in the knowledge that not everything will go smoothly, but how you rise to the occasion and learn from what you’ve encountered is the important part.”

For this EP she purposely chose to work with other bold and talented female artists enlisting Merill Garbus from Tune-Yards to produce some of the songs, as well as teaming up with Carly Rae Jepsen for the anthemic “ok on your own” a song which has already been streamed over 2 million times. Covered by everyone from The New York Times, Pitchfork, NPR, Rolling Stone and more it’s an undeniable song which sits perfectly alongside other key EP tracks like “bon iver.”

In tandem with the EP, Maia and a group of artists including Ellie Black (@efblack36), Madeleine Welsch (@madeleinewelsch), Bailey Crawford (@blycrawfordan) and more, each illustrated a page to coincide with a track on dusk.

Maia on the dawn & dusk pages project, “one of the greatest privileges i’ve had since working on music is having the ability to involve other creative minds on my projects! the pages project for both dawn & dusk has been so fun to work on, and i’ve gotten to work with a difference artist for every song and have them create a visual component to the music. each artist works within their own style and the color palettes for each EP, and as a result we’ve gotten to make an extremely cool compilation of artwork that can essentially make a visual extension of the music.”

Already her music has amassed well over half a billion streams and she has more than 4 million followers across her socials, including 2.2M on TikTok, 772K on YouTube and 96.8K on Twitch and the dusk EP hails yet another exciting chapter from 20-year-old.

Earlier this month mxmtoon also launched her new podcast 365 days with mxmtoon where each day for an entire year she will take you through the most interesting, weird, and funny events of that day in history. Released in partnership with Talkhouse and you can subscribe to daily episodes here. Drew Barrymore recently mentioned the podcast on The Drew Barrymore Show’s Weekender pop culture guide.

If dawn from earlier this year drew from the gentle optimism and hope found in a gorgeous sunrise, dusk is a beautiful exploration of the other side of the emotional duality that is the human experience. At once recalling mxmtoon’s earlier work while also expanding her sonic horizons more than ever before, dusk is an exciting new direction suggesting that the sky is truly the limit for Maia’s artistry.

The world’s changed a lot since dawn was released, and so has mxmtoon’s life. She recently turned 20 years old and, along with continuing to work on music, has dove headlong into the digital world by using her voice as an activist through social media platforms like TikTok, Twitch, and Discord.

From political explainer videos to charity stream sessions, Maia has been doing more than her best to, as she puts it, “keep some sort of normalcy amongst the chaos. These platforms are a way to connect and have conversations with people in a world where I don’t get to see them face-to-face for a while. It’s made me closer with my audience as a result.”

“If 2020 has proved anything, it’s that the world can keep throwing things at you even when it’s already crazy and horrible,” Maia continues while discussing her online activism, which has included speaking her mind and educating her fans on Twitter and TikTok. Maia is using her voice to empower the LGTBQ+ community, Black Lives Matter, and has been a vocal opponent against the Trump administration. “Speaking out on issues I believe in has always been incredibly important to me, especially in this time where being proactive is more important than ever. It’s about fighting for the issues that are really important and doing what we can for the world.”

dusk finds Maia continuing to explore who she is within that world around her-zooming in to moments of solitude and down time, documenting the downs that come after the ups. Joining her is an impressive list of collaborators ranging from Carly Rae Jepsen, to Tune-Yards’ Merrill Garbus, who produced several tracks on dusk. “It was heavily influenced by my own desire to work with strong female producers and artists,” Maia states regarding the creative process behind the EP. “Getting the opportunity to work with so many incredibly talented minds was such a privilege during this project. My hope for any art I make is to lift up and involve the voices of other women, and dusk is no exception.”

“It’s introverted and reflective,” she continues while discussing the EP’s thematic bent. “It’s about sitting with the darkness for a little longer-finding the unknown and not quite wanting to move away from it yet. It’s the way I wish I could make my previous music sound-sad, but beautiful.”

Indeed, dusk’s gloriously shaded sound sparkles even at its most darkly shaded moments. The lovely ukulele on first single “bon iver” calls back to that earlier sound with a shimmering richness of production value, while the elegant balladry of “asking for a friend” dissolves into a beautiful breakbeat-filled second half. Then there’s “ok on your own,” a slinky R&B jam featuring Canadian pop queen Carly Rae Jepsen. “I sent it to her and, to my surprise, she really liked it,” Maia enthuses. “To have her involved in the project is incredible.” 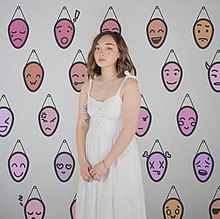 The Masquerade (stylised as the masquerade) is the debut album by indie-pop singer-songwriter mxmtoon, self-released on September 17, 2019. The album was primarily produced by Cavetown and was co-produced by mxmtoon. She released “Prom Dress”, “High & Dry”, “Seasonal Depression”, “Blame Game” and “Dream of You” as singles.

“I knew that I didn’t want to do another album right away,” she explains of the EP’s creation. “It was a personal challenge for myself to write music that’s more externally-facing. A lot of my narratives and lyrics are like listening to someone ramble about what’s going on inside their head, so I wanted to make music I could dance to and have other people feel like they move to.”

Unveiling the soaring pop track ‘lessons’ to celebrate, mxmtoon says, “My mind constantly runs rampant with questions about myself, my relationships, and my place in the world. One thing I’ve tried to be better at as the years have gone by though, is letting go. The ability to let yourself live in the moment rather than worrying all the time can be difficult, but to remember that each day is simply an opportunity to grow and learn is a lesson we all have to face. Life is full of teachable moments, and allowing yourself the space to make mistakes and to become better from those is vital. ‘lessons’ serves as a reminder to be kind to yourself, to trust your instincts, and live life with purpose. it’s not easy to remember this at all points in life, but my hope is that this song can leave this sentiment echoing in your brain, at least for a little while.”