Familia is the third studio album by Cuban-American singer and songwriter Camila Cabello, released on April 8, 2022, through Epic Records. Cabello wrote the album during the COVID-19 pandemic between 2020 and 2021 with producers such as Mike Sabath, Ricky Reed, Edgar Barrera and Cheche Alara. The album was inspired by “manifest collective joy” Cabello felt with her family during the pandemic and is about connecting with the singer’s Latin American roots.

To promote the album, Cabello headlined a virtual TikTok concert, titled “Familia: Welcome to the Family” on April 7, 2022. 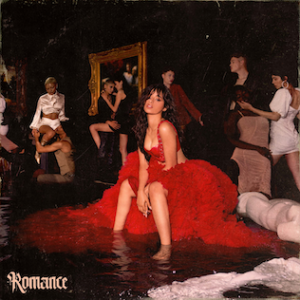 Romance is the upcoming second studio album by Cuban-American singer and songwriter Camila Cabello. It will be released on December 6, 2019, through Epic Records and Syco Music. The album will be promoted with The Romance Tour starting with Europe and then North America. It was supported by the singles “Liar”, “Shameless”, “Cry for Me”, “Easy” and “Living Proof”. Romance also includes “Señorita”, Cabello’s duet with Canadian singer Shawn Mendes, which is also included in the deluxe edition of Mendes’ self-titled third studio album.

Camila is the eponymous debut studio album by Cuban-American singer Camila Cabello. The album was released on January 12, 2018 through Epic Records, Syco and Sony Music. Work on the album began in January 2017, following Cabello’s departure from Fifth Harmony, with whom she had released two studio albums and one EP. The project was initially announced as The Hurting. The Healing. The Loving. before being changed to simply Camila. Primarily a pop record, it incorporates elements of Latin music and R&B. Camila was executive produced by Frank Dukes, with additional work from Skrillex and The Futuristics, among others. Cabello also worked with artists such as Sia Furler and Ed Sheeran on tracks that were eventually scrapped. The album has been met with a generally positive critical reaction, most notably for the the Latin influences and ballads featured.

The album was originally set to be released in October 2017, with “Crying in the Club” (2017) serving as the lead single. “Havana” was released as the album’s second official single following its initial release as a promotional single. “Havana” became a commercial success, topping the charts in territories such as the Australia, Ireland, and the United Kingdom. The success of the single resulted in “Crying in the Club”, along with several other songs, being scrapped from the project. “Never Be the Same” was released as the album’s second single in December 2017, and was officially serviced for radio airplay the following January. Cabello promoted the album through a number of interviews and televised performances.