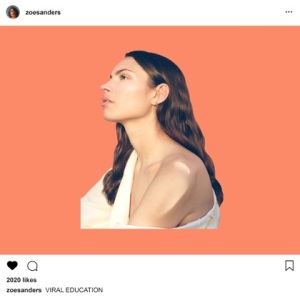 With Viral Education, her first career album, Zoe Sanders marks her arrival in the world of Quebec music.

“ Born and raised in Montreal ”, of an anglophone father and a francophone mother (“In French, I do Anglicisms, and in English, I say French words that do not exist. I am the very definition of Fr Anglais! ”), Zoe Sanders dreams of a great singing career from the age of six. The girl has always been in a musical environment. It must be said that there are inspiring examples around her. “Betty Bonifassi is a friend of the family,” Zoe says. She has been a pillar in my life. She allowed me to write one of my first songs. I am really blessed, because I grew up surrounded by artists of all kinds. This profession has never seemed inaccessible to me. When I saw Betty at the Oscars for Les Triplettes de Belleville, it proved to me that anything is possible if you work hard. “

And working hard, this 27-year-old woman did not fail to do so to culminate in her first album, Viral Education , which will be released under the Audiogram label on September 18. The singles Stay and Foolish , released during the past year, were delectable foretaste of this opus, and the piece Silver Boy , released the same day of our interview, is all the more convincing when it is savored. on several levels. “I wanted this dancing song to be a hymn to celibacy. Since our childhood, we read tales of princes and princesses, we watch films à la Bridget Jones’s Diary, in which there is always a quest for love made in order to complete oneself. However, everyone knows it, to be truly complete, you must first love yourself. You don’t necessarily need someone in your life. It is always better to be alone than in bad company. Several of my songs touch on this theme, because it is important for me to share this message. ”

More than a pretty face

When I ask Zoe how she defines herself as an artist, an angel walks by. “If I absolutely have to label myself,” she answers hesitantly, “I’m going to say that I am a pop singer, but, to me, that doesn’t mean much anymore, because everything that is popular, everything that is in the Top 40 on the radio, it’s pop. And I must also admit that I find it difficult to compare myself to other singers. You know why? Because it seems to me that we compare too quickly two women who sing, and often passing comments on their physique, which we do not or hardly do with men. It annoys me!”

She continues: “Yes, I have a modeling background, but I make music for the ears, not for the eyes. My first singles were really well received. I, who had no expectations, am blessed . But I also realize that we live in a superficial world and that I correspond to the standards of beauty. Beauty, however, is a double-edged sword. I know that it may have already opened some doors for me, but, once the door is open, you still have to work hard to succeed in keeping your place. ”